What is plate tectonics?

Bumper cars beneath our feet. 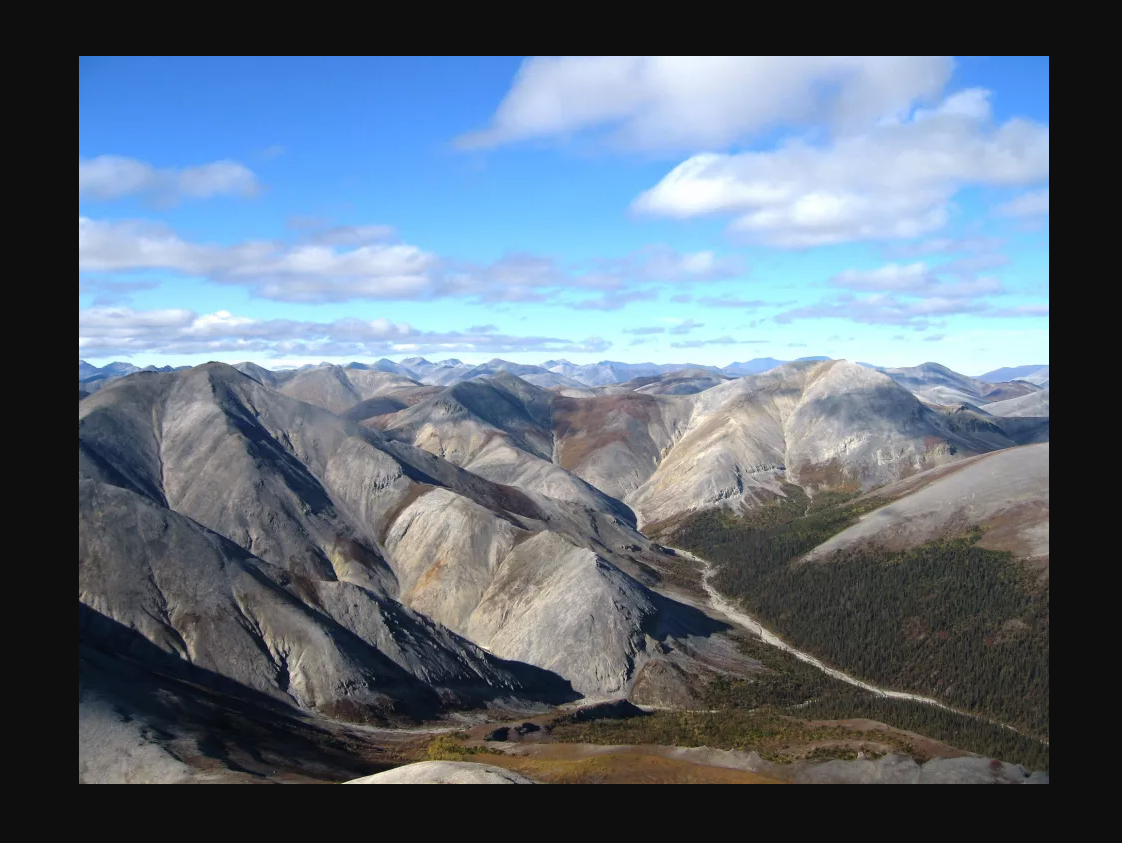 From the deepest ocean trench to the tallest mountain, plate tectonics explains the features and movement of Earth's surface in the present and the past.

Developed from the 1950s to the 1970s, the theory of plate tectonics is the modern update to continental drift, an idea first proposed by scientist Alfred Wegener in 1912 which stated that Earth’s continents had “drifted” across the planet over time. Wegener didn't have an explanation for how continents could move around the planet, but researchers do now: plate tectonics.

Plate tectonics is the theory that Earth's outer shell is divided into large slabs of solid rock, called “plates,” that glide over Earth's mantle, the rocky inner layer above Earth’s core. Earth’s solid outer layer, which includes the crust and the uppermost mantle, is called the lithosphere. It is 100 km (60 miles) thick, according to the Encyclopedia Britannica. Below the lithosphere is the asthenosphere—a viscous layer kept malleable by heat deep within the Earth. It lubricates the undersides of Earth's tectonic plates, allowing the lithosphere to move around.

"Before plate tectonics, people had to come up with explanations of the geologic features in their region that were unique to that particular region," said Van der Elst. "Plate tectonics unified all these descriptions and said that you should be able to describe all geologic features as though driven by the relative motion of these tectonic plates."

The driving force behind plate tectonics is convection in the mantle. Hot material near the Earth's core rises, and colder mantle rock sinks. "It's kind of like a pot boiling on a stove," Van der Elst said.

Meanwhile, geologists imagine the plates above this roiling mantle as bumper cars; they repeatedly collide, stick together, then rip apart. Geologists refer to the places where segments meet and divide as plate boundaries. They're thought to wrap around the Earth like seams on a baseball.

There are three ways in which plate boundaries meet, and each one triggers a unique geological feature:

Convergent boundaries occur where plates collide into one another. Where those plates meet, Earth's crust crumbles and buckles into mountain ranges. For example, India and Asia came together about 55 million years ago to create the Himalaya Mountains. As the mash-up continues, those mountains grow higher and higher. Geologists have discovered the Swiss Alps are being lifted faster than they are being lowered through erosion—and are thus growing every year, according to a 2020 study in the journal Earth-Science Reviews. However, when a mountain’s mass becomes too large to resist gravity, it will cease to grow. Erosion also hinders growth by wearing mountains down, but because mountains can grow at a relatively fast rate, erosion typically doesn’t win out, according to the University of Hawai’i at Manoa.

But converging plates don't always collide upward. Sometimes, an ocean plate (which is made of denser rock than landmasses) collides with a continental plate, in which case it "subducts" or dives beneath the other plate. It then descends into the Earth's mantle, the layer underneath the crust, melts in the mantle's hot magma, and is spewed out in a volcanic eruption. Many spectacular volcanoes are found along subduction zones, such as the "Ring of Fire" that surrounds the Pacific Ocean.

When two oceanic plates converge, a deep trench forms, such as the Mariana Trench in the North Pacific Ocean which is believed to be the deepest point on Earth. These types of collisions can also lead to underwater volcanoes.

As the name suggests, divergent boundaries are tectonic boundaries where plates "diverge" or are tugged apart. This motion creates giant troughs on land, such as the East Africa Rift. In the ocean, this same process creates mid-ocean ridges. Hot magma from Earth’s mantle wells up at these ridges, forming new ocean crust and shoving the plates apart. Underwater mountains and volcanoes can rise along this seam, in some cases forming islands. For example, the Mid-Atlantic Ridge runs directly through Iceland. 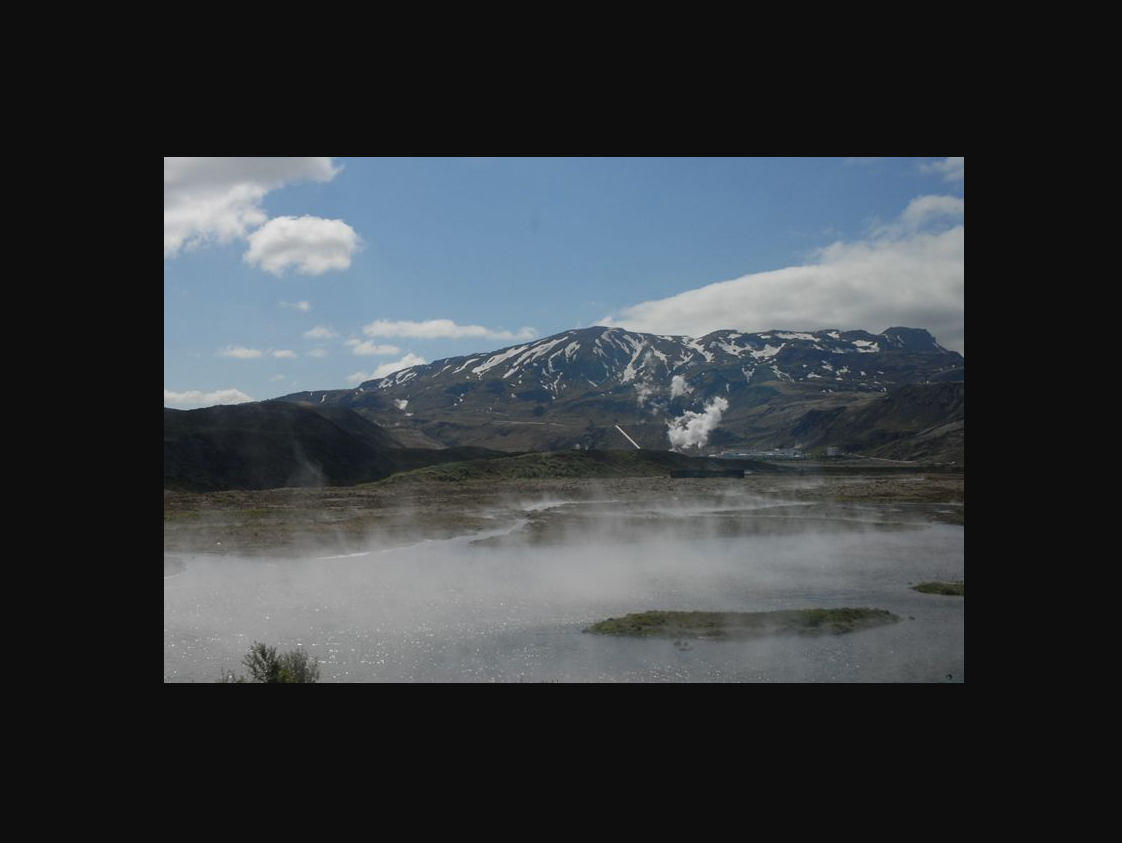 Thingvellir Valley is an Icelandic national park, known for its history in Iceland but also as the only place where the Mid-Atlantic Rift is above sea level. Visitors can walk down the rift between the North American plate and the Eurasian plate. Volcanic activity and earthquakes are common in the area. (Image credit: Kate Ramsayer/AGU.)

The final type of plate boundary, transform boundaries, exist where plates move sideways in relation to each other. It’s the slip-sliding motion of plate boundaries that triggers many earthquakes. California's San Andreas Fault, where the North American and Pacific tectonic plates grind past each other with a mostly horizontal motion, is one famous example of a transform boundary.

Tectonic plates move at a rate of one to two inches (three to five centimeters) per year, according to National Geographic. That's about as fast as your fingernails grow! 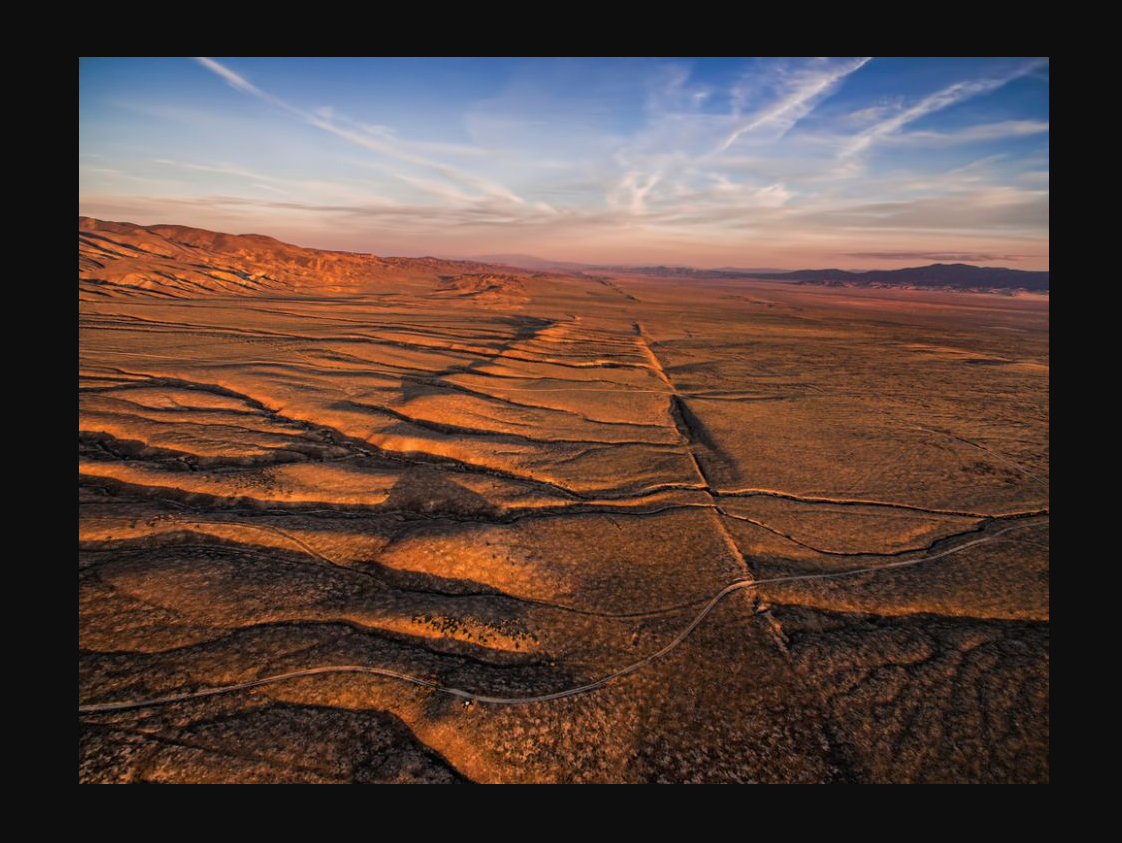 How many plates exist?

Because Earth is spherical, its tectonic or lithospheric plates are fractured into dozens of curved sections. (Imagine it like a cracked egg shell.) Each plate ranges from a few hundred to thousands of kilometers in size, according to the U.S. Geological Service (USGS), and depending on its size, is categorized as "major," "minor" or "micro."

According to World Atlas, seven major plates exist, including the North American, Pacific, Eurasian, African, Indo-Australian, South American and Antarctic tectonic plates. However, according to a 2012 article in Nature, earthquakes over the last few decades are evidence that the Indo-Australian plate has cracked over the last 10 million years, creating a separate Indian Plate and Australian Plate which will increase the number of major plates to eight. 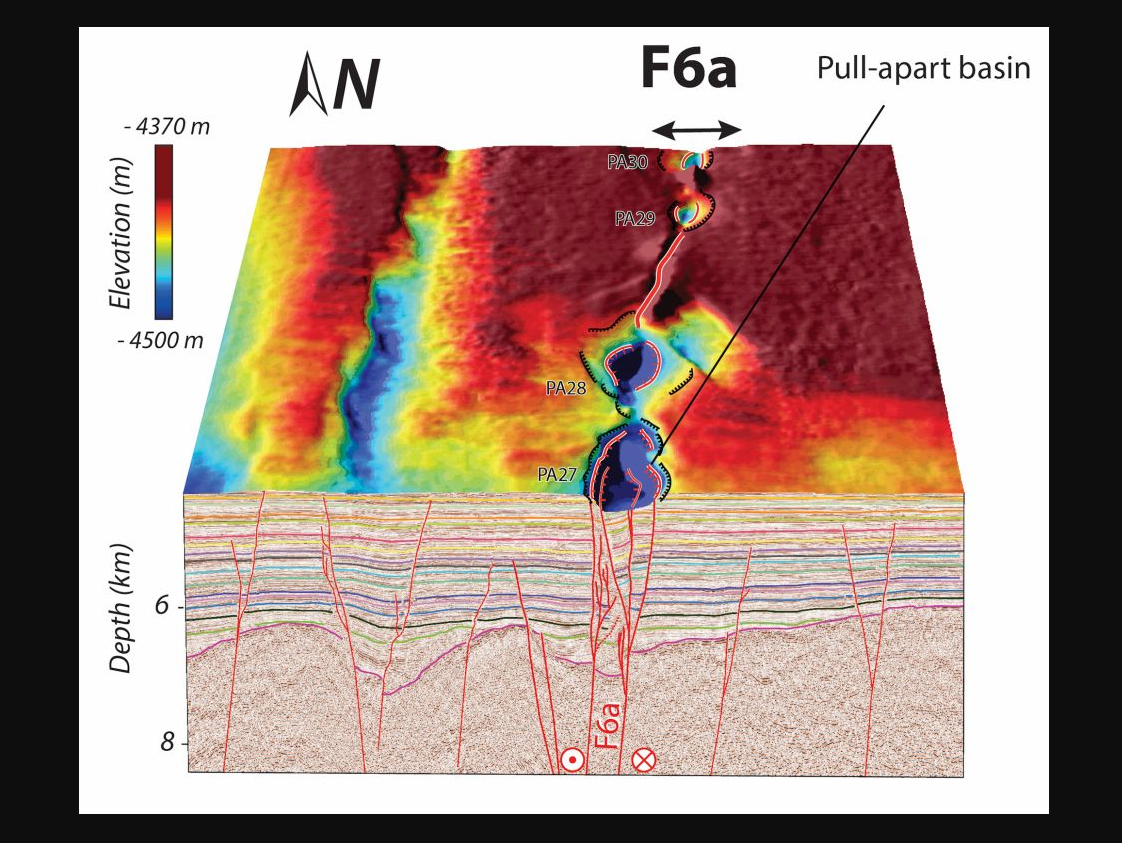 This map shows the seafloor and deformation below it at a fracture in the Wharton Basin in the Indian Ocean. This fracture likely formed when the ocean crust was formed, but now it is being turned into a new plate boundary. The depressions are indicative of a strike-slip fault, which is the same kind of fault as the San Andreas Fault in California.  (Image credit: Aurélie Coudurier-Curveur; Coudurier‐Curveur, A. et al. Geophysical Research Letters (2020); CC BY 4.0)

Whether that new divide counts as a boundary or not, the Pacific Plate is still the largest of all tectonic plates. It measures 39,768,522 square miles (103,000,000 square kilometers) in size, and lies hidden beneath the ocean.

The early Earth and earliest evidence of plate tectonics

While the Earth is estimated to be 4.54 billion years old, oceanic crust is constantly recycled at subduction zones. That means the oldest seafloor is still only about 200 million years old. The oldest ocean rocks are found in the northwestern Pacific Ocean and the eastern Mediterranean Sea. Fragments of continental crust are much older, with large chunks at least 3.8 billion years old found in Greenland.

With clues left behind in rocks and fossils, geoscientists can reconstruct the past history of Earth's continents. Most scientists think modern plate tectonics took over from earlier planetary development about 3 billion years ago, based on ancient magmas and minerals preserved in rocks from that period. However, researchers have found evidence that plate tectonics could have been active for as long as 4 billion years, according to a 2020 article in Discover Magazine. 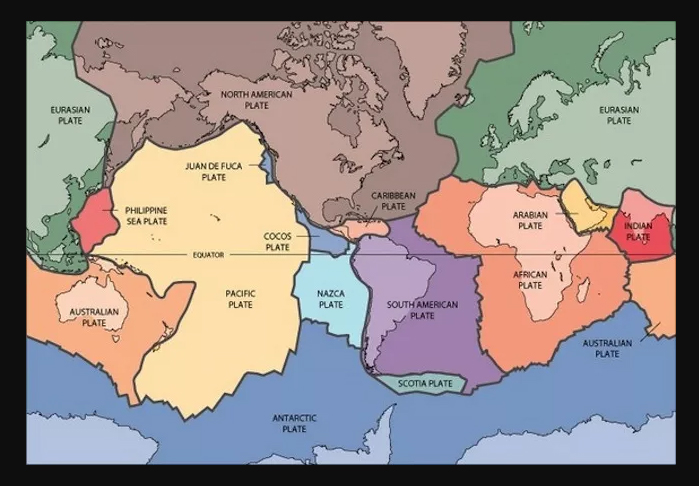 Some of the major modern-day plates under our feet. Plate tectonics is an ongoing process, so long in the future these plates could be as unrecognizable as Earth's surface was a billion years ago. (Image credit: USGS)

"We don't really know when plate tectonics as it looks today got started, but we do know that we have continental crust that was likely scraped off a down-going slab [a tectonic plate in a subduction zone] that is 3.8 billion years old," Van der Elst said. "We could guess that means plate tectonics was operating, but it might have looked very different from today."

As the continents jostle around the Earth, they occasionally come together to form giant supercontinents or a single landmass. One of the earliest big supercontinents, called Rodinia, assembled about 1 billion years ago. Its breakup is linked to a global glaciation called Snowball Earth.

A more recent supercontinent called Pangaea formed about 300 million years ago. Africa, South America, North America and Europe nestled closely together, leaving a characteristic pattern of fossils and rocks for geologists to decipher once Pangaea broke apart. The puzzle pieces left behind by Pangaea, from fossils to the matching shorelines along the Atlantic Ocean, provided the first hints that the Earth's continents move.