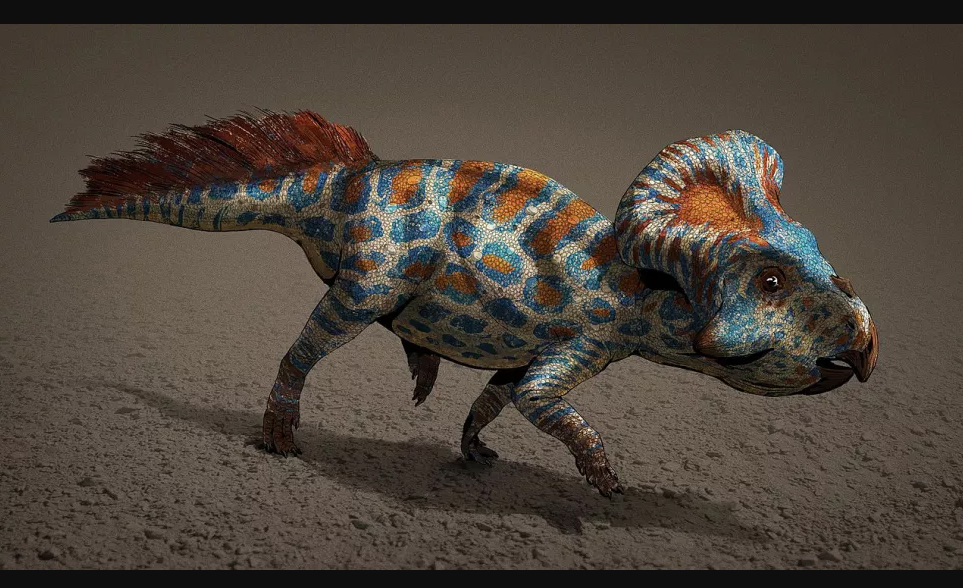 An artist's rendition of a Protoceratops with a colorful neck frill. (Image: © CC-BY-SA 4.0)

Protoceratops — a dinosaur that looked a bit like a mini-Triceratops without horns — had elaborate and varied neck frills. Paleontologists have debated what they were used for: Defense? Temperature regulation? Or perhaps, like modern birds with colorful tail feathers, the dinosaurs evolved the frills to show off their fitness to potential mates and competitors, a process of sexual selection. In sexual selection, an animal with a certain trait that appeals to potential mates or otherwise allows them to reproduce more will get passed down to the next generation and become more common.

It's hard to prove sexual selection directly, because it's impossible to know if a dinosaur with a bigger, brighter frill actually had more success with mating and producing offspring. But researchers at The Natural History Museum London and Queen Mary University London turned to clues about the growth and variation of the frills to see if they matched the patterns of sexually selected traits in animals seen today.

The researchers stitched together dozens to hundreds of photographs of 65 skulls from Protoceratops species, using software to create 3D models of the skulls. Of these, 30 were complete digital reconstructions. The skulls came from dinosaurs ranging from a day old to full adulthood, so the scientists could compare growth rates of the frills with that of other parts of the skull.

Frills also showed a growth pattern called allometry, which is common in sexually selected traits. In allometry, a particular body part grows faster and bigger than other body parts on the animal; a modern example would be the antlers on a buck.

The frills also showed high variation, another hallmark of sexual selection. However, they did not show sexual dimorphism, or big differences between males and females. Many sexually selected traits are dimorphic, but not all, study co-author Andrew Knapp, a postdoctoral researcher at the museum, said in a statement.

"While there are quite a few examples in living animals where usually females select males based on the size of their tail feathers or calls, it is quite often overlooked that males do the same thing with females as well," Knapp said. "In a species of bird known as the crested auklet, both males and females have an impressive plume of feathers curling from the tops of their heads used by each sex to signal their health. So while the plume of feathers is a sexually selected trait, it has not led to sexual dimorphism."

Male and female frills may have been different in ways that don't preserve in the fossil record, Knapp added. Perhaps male frills were more colorful, for example. Expanding the 3D-scanning research to other frilled dinosaurs could help cement the notion that sexual selection explained the evolution of the frills, the researchers concluded in their study published Wednesday (Feb. 3) in the journal Proceedings of the Royal Society B.