Paleontologists are searching for how carnivorous dinosaurs went from pipsqueaks to titans. 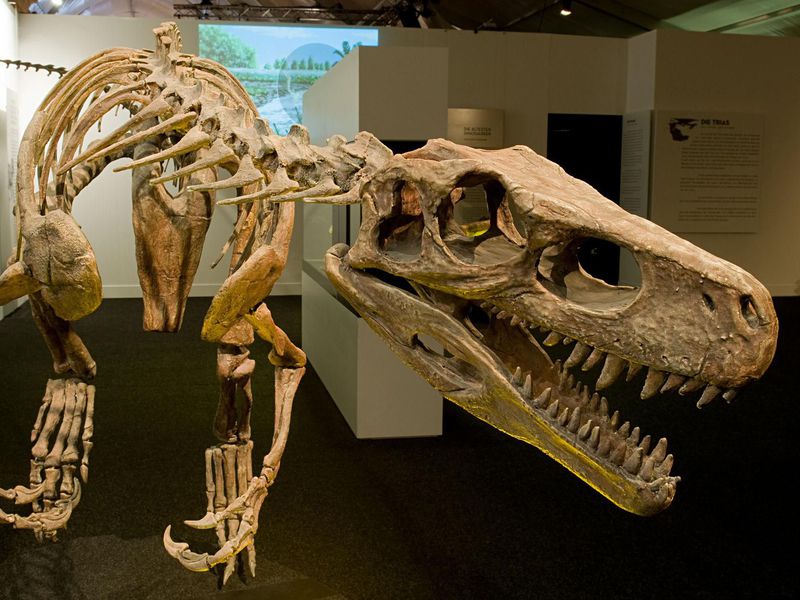 The names alone are imposing. Take Tyrannosaurus, the tyrant lizard; Torvosaurus, the savage lizard; or Giganotosaurus, the giant southern lizard. These monstrous carnivores dominate our imaginations, movies and museum halls, and no natural history museum nor Jurassic Park film would be complete without a towering predatory dinosaur tall enough to look into a second-story window.

But all these giants were latecomers in the dinosaur saga. For tens of millions of years, even as other dinosaur species grew to huge sizes, 40-foot carnivores weren't around. How, then, did the meat-eaters rise to the top of the food web in the Age of Dinosaurs? The answers are just starting to spill out of the stone. 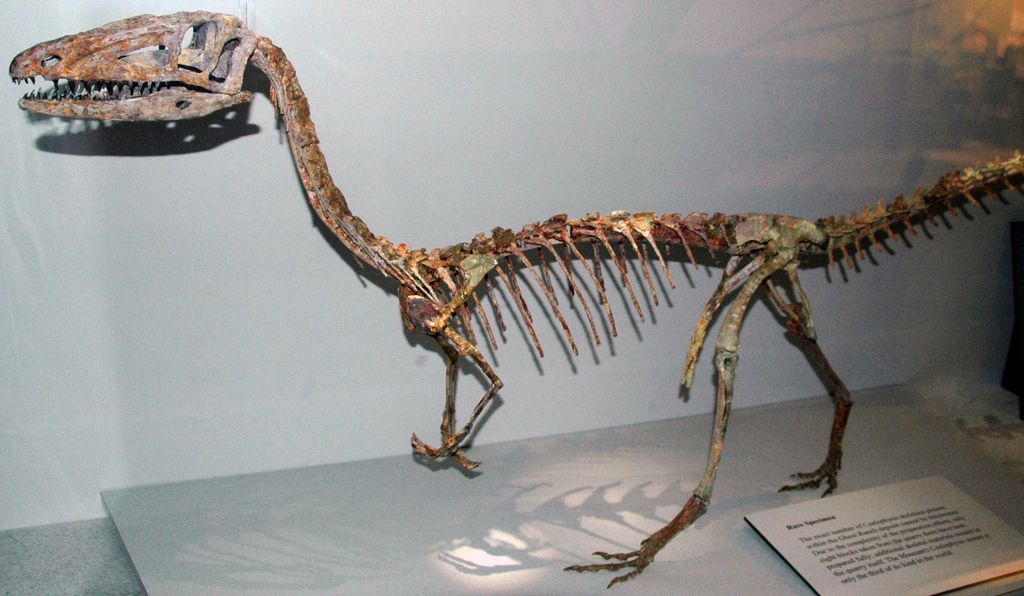 Where Carnivorous Dinosaurs Came From

First, a quick history lesson. The earliest dinosaurs arose about 235 million years ago during the Middle Triassic. They didn’t look much like modern favorites Triceratops or Spinosaurus. Instead, these lanky creatures didn’t get much bigger than a German shepherd. The current spate of evidence suggests they were omnivorous. These first dinosaur populations varied and evolved into new forms including the ancestors of the long-necked sauropods and a group called the theropods, which includes all known carnivorous dinosaurs.

Up until now, paleontologists thought theropods remained generally small and on the ecological sidelines from about 235 through 201 million years ago. It was only after a mass extinction at the end of the Triassic, at the 201 million-year mark, that carnivorous dinosaurs started to get big. But that view is starting to change thanks to a new reading of the bone trail by scientists who think large meat-eaters may have appeared much earlier.

Virginia Tech paleontologist Christopher Griffin says a key player in this story is Herrerasaurus. This early dinosaur roamed Triassic Argentina about 230 million years ago and reached more than 16 feet in length with a mass greater than a polar bear. There is some debate about whether or not Herrerasaurus is truly a theropod, but it was a carnivorous dinosaur and was one of the largest of its time.

The known carnivorous dinosaurs during the later part of the Triassic appeared to be smaller and less imposing than the crocodile relatives they lived alongside (such as Postosuchus from the southwestern United States). Thanks to a better understanding of dinosaur growth, however, paleontologists have found that some of those little theropods were hiding a secret. 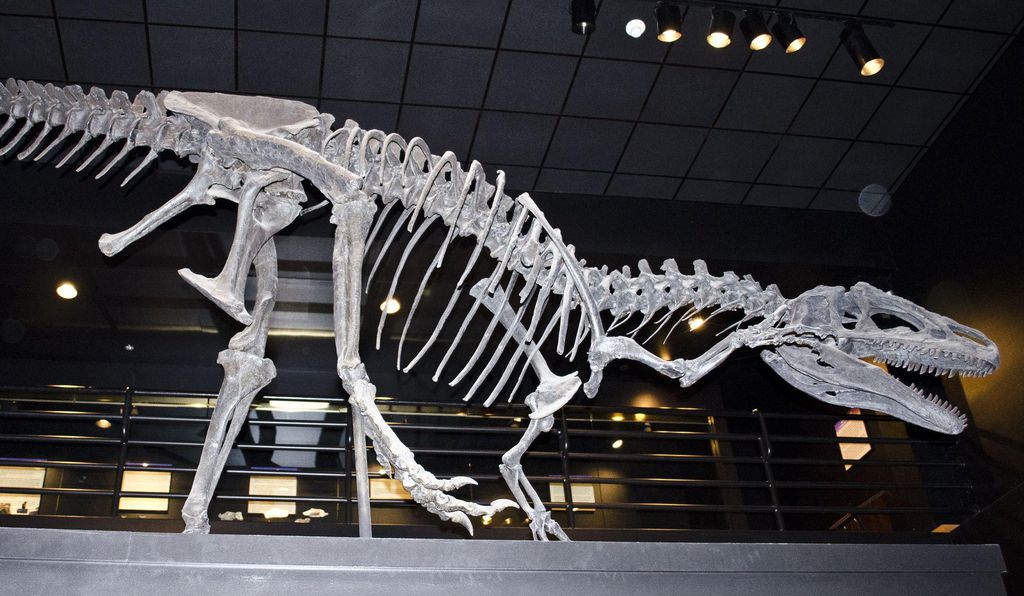 Nearly complete skeleton of an Allosaurus fragilis known as "Big Al" on display at the Museum of the Rockies in Bozeman, Montana. (Wiki Commons / Tim Evanson )

“The few remains we’ve found of larger Triassic theropods come exclusively from immature animals that are still growing rapidly,” Griffin says. These young carnivores would have grown to lengths exceeding 18 feet in adulthood. That’s a little less than half a full-grown T. rex, but enough to make you want to avoid meeting such a carnivore face-to-face.

But the evolution of larger body sizes is only part of the story. “The big difference in the theropods of the Triassic compared to the Jurassic, especially the earliest part of the Jurassic, is abundance,” Griffin says. To date, only six partial skeletons of large Triassic theropods are known worldwide. That’s pretty paltry compared to the following Jurassic period (from 201 to 145 million years ago) when dinosaurs started to make their mark on the landscape and proliferate. Carnivorous dinosaurs weren’t just getting bigger. They were digging their claws into ecosystems like never before.

A Muddled Picture of Evolution

During the early part of the Jurassic, carnivorous dinosaurs were similar in size to the largest of their Triassic precursors. Dilophosaurus, made famous in slightly fictionalized form by Jurassic Park, was a little larger than Herrerasaurus and strutted around what’s now Arizona about 190 million years ago. Still, it could not compare to the giants that came later in the Jurassic, about 150 million years ago—carnivores such as Allosaurus and Torvosaurus that could reach 40 feet long.

The critical transition between big and giant seemed to happen sometime in the Middle Jurassic, a little-understood time when dinosaurs flourished. The critical time is between 201 and 174 million years ago, in the Early and Middle parts of the Jurassic. As luck would have it, once such carnivore was recently unearthed.

Late last year, Ludwig-Maximilian University of Munich paleontologist Oliver Rauhut and colleague Diego Pol named an exceptional skeleton of a Middle Jurassic carnivore they called Asfaltovenator. This was a large animal, more than 25 feet long, that approached the average size of the later Allosaurus and bears more a passing resemblance to the later dinosaur.

Asfaltovenator lived between 174 and 168 million years ago, millions of years before more famous large carnivores of the Late Jurassic like the three-horned Ceratosaurus and the massive Torvosaurus. More importantly, Rauhut and Pol say, Asfaltovenator appears to display traits of more than one theropod lineage. The bones carry echoes of a more ancient time before the major theropod groups; Asfaltovenator most closely resembles Allosaurus, but the dinosaur also has some traits seen in a group called megalosaurs, a family of large-headed carnivores such as Torvosaurus and Megalosaurus. This could be an indication that these two families split from each other a few million years prior, occupying different niches as such dinosaurs grew ever larger.

Museum dioramas display the towering terrors of the Late Jurassic, when dinosaurs like Allosaurus lived among armored herbivores like Stegosaurus and immense vegetarians like Diplodocus. For tens of millions of years afterwards, to the end of the Cretaceous period (66 million years ago), giant carnivores evolved and proliferated. But that boom started long before. “There is much more to be learned about theropod evolution during this time,” Rauhut says, with finds like Asfaltovenator hinting at what remains to be uncovered.