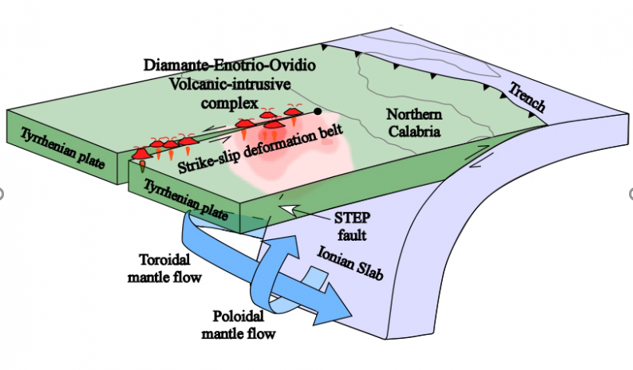 Researchers have identified the previously unknown Diamante–Enotrio–Ovidio volcanic-intrusive complex on the floor of the southern Tyrrhenian Sea off the coast of Calabria, Italy, which they suggest formed because of a Subduction-Transform Edge Propagator (STEP) fault in the subducting Ionian slab that directed the ascent of magma rising from the mantle.

Subduction and retreat of the Adriatic–Ionian microplate—a sliver of oceanic crust that separated from Africa during the Cretaceous—beneath Eurasia have controlled much of the tectonic and stratigraphic evolution of the western Mediterranean Sea. The subduction forged Mount Vesuvius and other southern Italian volcanoes and their concomitant geohazards, and episodes of rapid rollback of the subducting slab have led to the opening of basins including the Tyrrhenian Sea between Sardinia, Sicily, and mainland Italy.

Tearing and faulting of downgoing oceanic plates are common in subduction systems, sometimes producing faults called Subduction-Transform Edge Propagator (STEP) faults at slab edges that propagate perpendicularly to the subduction strike. This process can allow magma upwellings caused by subduction-induced mantle flow to rise to the surface and has been suggested to explain the presence of volcanic seamounts beneath the southern Tyrrhenian Sea. To date, however, this magmatism has been poorly documented.

Now De Ritis et al. report a detailed investigation of a large volcanic-intrusive complex located about 15 kilometers off the Tyrrhenian coast of Calabria in southwestern Italy. Using a suite of geophysical data, including multibeam sonar bathymetry, as well as seismic reflection, magnetometric, and seismological data, the authors characterized the complex, which formed within the past 780,000 years and had not yet been identified or studied in detail.

The team’s data indicated the presence of numerous magmatic intrusions that reached the seafloor in several locations to form seamounts and other volcanic features like chimneys and lava flows. The researchers divided the complex into two distinct realms: an eastern domain (the Ovidio seamounts), characterized by a series of flat-topped volcanic edifices, and a western domain (the Diamante and Enotrio seamounts), where strike-slip faults deform the volcanic edifices.

Collectively, the results affirm that the newly identified volcanic-intrusive complex originates from decompression melting of mantle material at the northern edge of the Ionian slab. The authors hypothesize that a strike-slip belt associated with the formation of a STEP fault controlled the magma’s ascent and the location of this complex. These findings shed light on magmatic processes occurring along the edges of subducting slabs as well as on the potential geohazard risk in a densely populated region whose volcanic activity was previously believed to be one of the best characterized in the world.