The world's largest glaciers are losing ice far faster than they can replenish it.

This map shows the amount of ice gained or lost by Antarctica between 2003 and 2019. Dark reds and purples show large average rates of ice loss near the coasts, while blues show smaller rates of ice gain in the interior.

Two new satellite images remind us that Earth's ice sheets are losing so much mass it is becoming obvious from space.

In the vivid new maps published as part of an April 30 study in the journal Science, researchers illustrated 16 years of ice loss in Greenland and Antarctica as seen by a laser-emitting NASA satellite. The images paint a picture of rapid melt around the coasts of both regions (shown in red and purple in the maps), far outweighing modest ice-mass gains (shown in light blue) farther inland.

All that melting ice was responsible for a total 0.55 inches (14 millimeters) of sea-level rise between 2003 and 2019, the researchers found. That rise puts Earth on track for the worst-case climate warming scenario laid out in the Intergovernmental Panel on Climate Change's (IPCC) latest report, previous research found. That scenario would put hundreds of millions of people living in coastal communities at risk of losing their homes — or their lives — to flooding.

For the new study, the researchers used the newest data from NASA's ICESat-2 satellite, which launched in 2018 to monitor elevation changes on land (and ice) around the world by bathing the planet in laser beams. The team compared 2019 elevation levels with data recorded by the satellite's predecessor — named simply ICESat — between 2003 and 2009. At thousands of locations where the two datasets overlapped, the team could see precisely how much ice had vanished from Greenland and Antarctica between 2003 and 2019.

Ice shelves — enormous ledges of ice floating over the ocean at the edges of Greenland and Antarctica — lost the most mass by far in both regions, the researchers said. While ice shelves are already partially submerged in water and therefore do not actively raise sea levels when they melt, they provide a structural integrity to glaciers that prevents ice farther inland from gushing into the sea. 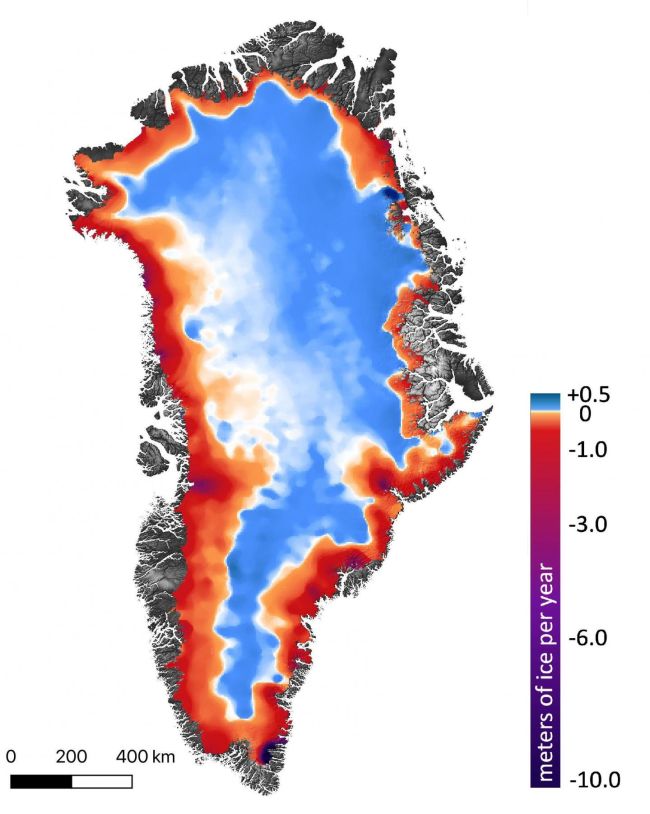 This map shows the amount of ice gained or lost by Antarctica between 2003 and 2019. Dark reds and purples show large average rates of ice loss near the coasts, while blues show smaller rates of ice gain in the interior.

"It's like an architectural buttress that holds up a cathedral," study co-author Helen Amanda Fricker, a glaciologist at Scripps Institution of Oceanography at the University of California, San Diego, said in the statement. "The ice shelves hold the ice sheet up. If you take away the ice shelves, or even if you thin them, you are reducing that buttressing force, so the grounded ice can flow faster."

The new analysis reveals, with unprecedented detail, the response of these ice sheets to changes in climate, "revealing clues as to why and how the ice sheets are reacting the way they are," study co-author Alex Gardner, a glaciologist at NASA's Jet Propulsion Laboratory in Pasadena, California, said in the statement.