Mummy with a gold tongue found in Egypt

Could they speak to the gods? 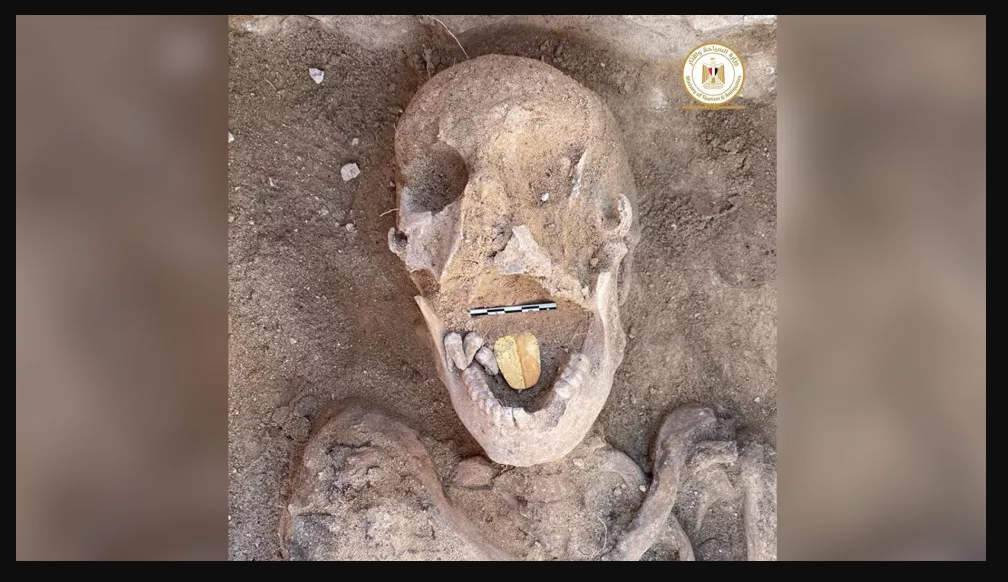 This 2,000-year-old mummy was buried with a golden tongue, likely to help the deceased speak in the afterlife. (Image: © Egyptian antiquities ministry)

Archaeologists have found a 2,000-year-old mummy with a gold tongue at an ancient Egyptian site called Taposiris Magna.

Embalmers perhaps placed the golden tongue on the mummy to ensure that the deceased would be able to speak in the afterlife, the Egyptian antiquities ministry said in a statement released Jan 29.

For instance, if the golden-tongued mummy encountered Osiris, the god of the underworld, in the afterlife, they would have needed to be able to speak to the god, the statement said. It isn’t clear if the mummy had a speech impediment when they were alive. It’s also not clear why the tongue was made out of gold specifically.

The archaeologists,  led by Kathleen Martinez, from the Dominican Republic, discovered the mummy in one of 16 burials at Taposiris Magna, which has temples dedicated to Osiris and Isis, a goddess who was both the wife and sister of Osiris. Previously, archaeologists found a hoard of coins decorated with the face of Cleopatra VII, suggesting the temples were in use during the queen’s reign.

The other 15 burials also date back around 2,000 years and contain remarkable treasure. In one, a female mummy is wearing a death mask that covers much of her body and depicts her with a headdress while smiling.

Two of the mummies were found with the remains of scrolls, which scholars are currently analyzing and deciphering. The plastered layers, or cartonnage, encasing one of these mummies has golden decorations of Osiris, the statement said.

The researchers also found several statues that depict the people who were buried at the site; the statues are so well preserved, you can still make out the individual’s hairstyles and headdresses, the statement said. The statues give the people a formal look, with no smiles on their faces.

Though the archaeologists aren’t sure exactly when the individuals died, they can tell that the people lived at a time when Egypt was ruled either by the Ptolemies (304 B.C. to 30 B.C.), who were the descendants of one of Alexander the Great’s generals, or by the Roman Empire, which took over the country after the death of Cleopatra VII in 30 B.C.