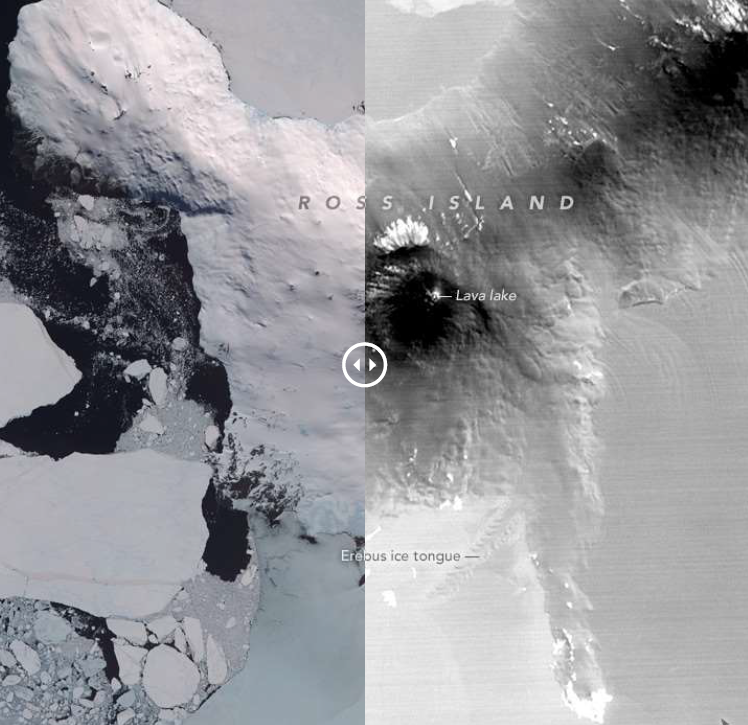 Near Mount Erebus, the water is frozen but the rock is liquid.

Standing just off the coast of West Antarctica, Ross Island was built by the activity of four volcanoes. Erebus is still active, providing a rare bit of warmth in na extremely cold environment. The volcano sits above a thin slice of crust, so molten rock more easily rises up from Earth’s interior. It regularly emits plumes of gas and steam, and occasionally spits out rock (bombs) in stombolian eruptions. At least one lava lake has churned within its caldera since 1972. Mount Erebus is thought to be the southernmost active volcano in the world.

On December 31, 2013, the Advanced Spaceborne Thermal Emission Reflection Radiometer (ASTER) on NASA’s Terra satellite acquired images of the western end of Ross Island in mid-summer. The top image is built from a combination of infrared wavelenghts and reveals where the landscape is warmer (Bright white) or cooler (black). The lava lake stands out amidst the mostly shadowed interior of the caldera, as do areas on the island where bare rock is exposed to sunlight instead of being buried under snow and ice.

Explorer James Clark Ross and his crew first sailed past the island in 1841 and caught a glimpse of Mount Erebus erupting. Members of Ernest Shackleton’s expedition climbed to the summit in 1908. Scientists are still observing the volcano through the Mount Erebus Volcano Observatory and field campaigns to look for extreme life forms. The largest Antarctic settlement (about 40 kilometers or 25 miles away). A key parto f New Zealand’s Antarctic research program, Scott Base, i salso nearby on the peninsula.

The Mount Erebus stratovolcano rises 3794 meters (12,447 feet) above sea level. To the south, the Erebus ice tongue stretches out into McMurdo Sound. With its serrated edges, the 11-kilometer-long ice tongue is the leading edge of a glaciar that starets on the volcano’s flanks. The ice tongue is estimated to stand just 10 meters above the water line, but it does not thaw much during the summer melt season. The action of sea water sculpts the jagged edges.