The 1980 eruption of Mount St. Helens influenced scientists who witnessed the event and spurred a new era in physical volcanology.

Barry Voight films a small eruption from the intact Mount St. Helens, about 1 month before its catastrophic 18 May 1980 eruption.

In March 1980, Mount St. Helens began to wake up. A series of small earthquakes shook the mountain, and over the next 10 days, hundreds more followed. On 27 March, violent steam explosions blasted through the summit’s ice cap to create a giant 75-meter-wide crater.  On 18 May, the volcano’s entire north face collapsed, creating the largest landslide ever recorded.

Just a few years earlier, in 1978, two U.S. Geological Survey (USGS) researchers—Rocky Crandell and Don Mullineaux—had cautioned that the volcano could erupt relatively soon, “perhaps before the end of the century.”

Consequently, volcanologists like Mullineaux, Crandell, and USGS research geologist Don Swanson were quick to arrive in March. Swanson had grown up in southwestern Washington, and the Cascades were familiar territory. Before 1980, however, his research had focused mainly on the geological study of the range’s older volcanic rocks. “Then Mount St. Helens came along,” Swanson said, “and I got back into the active side of volcanism.”

By early April, the summit’s crater had stretched wide across the summit, and a broad area of the volcano’s northern flank appeared to be growing outward. Concerned, Crandell sought the expertise of Barry Voight, a landslide researcher at Pennsylvania State University. On the basis of what he saw, Voight believed that a giant landslide was possible—and that it could “uncork” the volcano and cause a major eruption.

“I remember having dinner at a Portland fish restaurant with a former grad student, making a back-of-envelope calculation of a likely volume of collapse—well over a cubic kilometer—and thinking it could happen very soon and shock a lot of people,” said Voight.

Meanwhile, to quantify movement on the expanding bulge, Swanson and other scientists, with helicopter support, climbed over the mountainside to install surveying targets they had fashioned from plastic highway reflectors.

Only weeks later, at 8:32 a.m. on 18 May, the north slope of Mount St. Helens collapsed. With that release of pressure, the magma pocket inside the volcano exploded and ejected a blast of hot gas and rock. The eruption continued for 9 hours, and further eruptions continued for months… 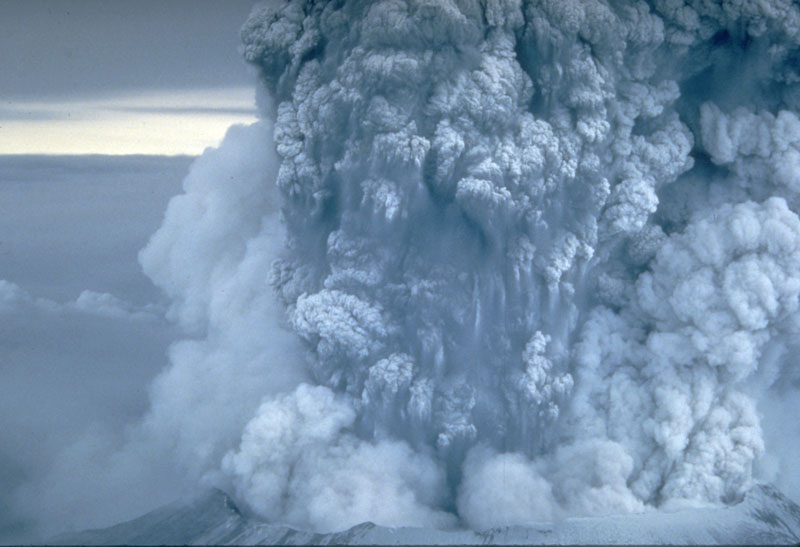 An ash plume from the eruption towers over Mount St. Helens on 18 May 1980. The plume moved eastward at an average speed of 95 kilometers per hour, and the volcano erupted for 9 hours, eventually reaching 20–25 kilometers above sea level. By early 19 May, the devastating eruption was over.

Milestone Event for Volcanology in the United States

The eruption and landslide ultimately claimed the lives of 57 people, including USGS geologist David Johnston. It also sparked major changes in the field of volcanology and influenced the careers of many scientists.

For Mullineaux and Crandell, the eruption was the culminating event of their distinguished careers. Both retired officially from the USGS shortly after 1980 but continued to publish articles about volcano hazards, and Mullineaux coedited the definitive 1981 USGS monograph about the catastrophe.

But for many scientists, the disaster marked a new beginning. “The death of Dave Johnston and all the others in 1980 was a, was kind of a spur to me to ask, ‘Can we do better in the future?’” Swanson said.

Swanson spent the next 6 years in the field at Mount St. Helens, painstakingly tracking the growth of new lava domes inside the crater. During that time, the volcano continued to erupt, and scientists were able to start forecasting its behavior.

Voight also worked on the posteruption disaster response and guided his graduate student Harry Glicken’s investigation into the 1980 slope failure at the volcano. Their study triggered a dramatic surge of interest in volcanic landslides and related explosions caused by volcano collapses and the global realization that such events were not rare, as previously thought. 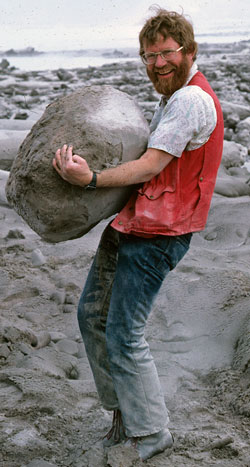 Don Swanson carries a huge pumice rock in the weeks after the 1980 eruption.

Glicken went on to become an expert on volcanic avalanches but in 1991 was killed by an explosive eruption of Mount Unzen, Japan. “Harry was a brilliant, insightful field geologist,” Voight said, “and his life was rewarding for science.”

Voight’s analysis of various Mount St. Helens data helped him formulate the failure forecast method, which can help to forecast landslides and volcanic eruptions. His field studies and engineering approach to volcano processes earned him a strong reputation in the community. “Wherever there was a problem that involved a potential slope failure at a volcano, my name would come up,” Voight said.

Voight went on to assess the potential for slope collapses and related eruptions at volcanoes around the world, including those in South America, Japan, Russia, Southeast Asia, and the Caribbean. “Without the Mount St. Helens eruption, I wouldn’t have done any of these things,” Voight said. “It completely changed the trajectory of my career.”

Following the 1980 eruption, the U.S. government boosted funding for research in volcanology more than tenfold, which led to the establishment of the USGS Cascades Volcano Observatory (CVO) in 1981. “The Mount St. Helens eruption really galvanized a lot of people from the federal government side to the university side to start thinking about volcanism in the United States,” said Seth Moran, the scientist-in-charge at CVO.  “On a basic level, it’s the reason why I’m doing what I’m doing today.”.

The Mount St. Helens eruption also inspired many volcanologists to increase their level of work toward mitigating the impacts of volcanic activity. Swanson went to the USGS Hawaiian Volcano Observatory in 1998, with the goal of better understanding the explosive history of Kīlauea. His research there highlighted the complex relationship between the caldera collapse and eruptive activity at Kīlauea and formed the basis for much of the assessment of hazards associated with Kīlauea’s 2018 summit collapse.

“I’m not sure I would have had the same interest in the explosive deposits from Kīlauea if I hadn’t had the experience of seeing what the explosion at Mount St. Helens did,” Swanson said. “But there was a greater awareness from the 1980 eruption that volcanoes are hazardous, and that has sharpened our studies of Kīlauea.”

A scientist surveys the bulging flank of Mount St. Helens after the 1980 eruption.

In 1985, Colombian authorities requested assistance from the United States shortly after the eruption of the Nevado del Ruiz volcano, which resulted in 23,000 deaths. Voight was sent to Nevado del Ruiz, and his analysis of the disaster indicated that cumulative human error led to the extent of the tragedy and improved hazard assessment and mitigation measures could have saved many lives.

“I was able to examine why the whole disaster took place and became more acutely aware of the hazard management aspect,” Voight said. “A major general lesson was that scientists, who had the best appreciation of the true hazard, needed to shoulder more social responsibility—to ensure that an appropriate and effectively delivered message reached the people at risk.” 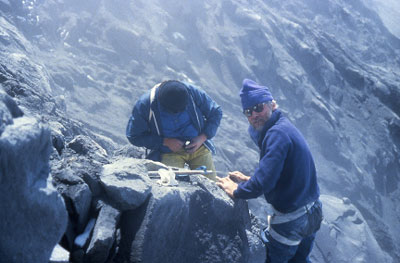 Barry Voight (facing camera) and Oscar Ospina install an instrument under the summit ice of Nevado del Ruiz, shortly after the volcano’s fatal eruption in 1985.

Voight was able to use his experience and skills in physical volcanology and hazard management when he was asked to be part of a team of scientists monitoring the Soufrière Hills volcano at Montserrat, an island in the Lesser Antilles. His research and hazard mitigation efforts there extended over 17 years and multiple eruptions.

In a December 1997 eruption, an anticipated flank collapse at Soufrière Hills led to a severe and devastating lateral blast, closely mimicking that of Mount St. Helens in 1980. Fortunately, islanders had evacuated, and there were no fatalities associated with this dramatic event. “If you look at it in a global context, I think what was learned at St. Helens has probably saved, and will continue to save, tens of thousands of lives,” Swanson said.