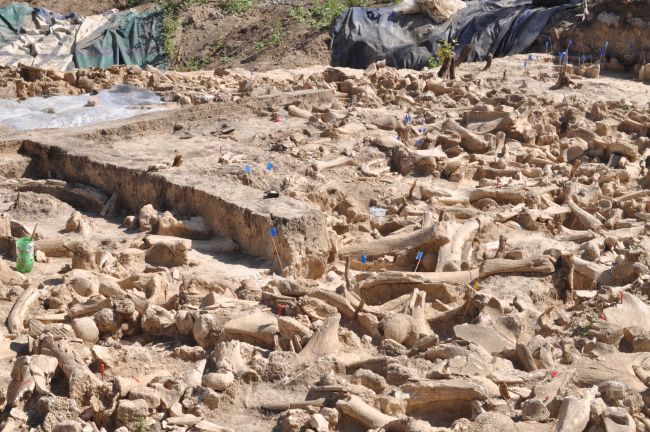 Archaeologists in Russia have found a large circle made of the stuff of horror movies: the bones of mammoths and other ice age creatures that lived more than 20,000 years ago, a new study finds.

Among the remains are the bones of more than five dozen mammoths, as well as bones from reindeer, horses, bears, wolves, red foxes and Arctic foxes, the study researchers said.

"It is made up of thousands of bones that come from at least 60 different woolly mammoths," study lead researcher Alexander Pryor, a lecturer of prehistoric archaeology at the University of Exeter in England, told Live Science. "All parts of the mammoth bodies are represented, from very large bones like skulls and leg bones to smaller bones like vertebrae." 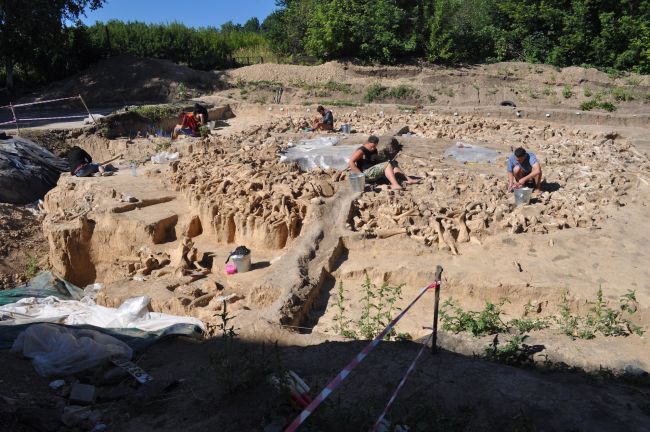 Archaeologists excavate the incredible bone structure made during the last ice age.

There are about 70 other ice age "bone circles" at about 25 sites in Ukraine and Russia already known to archaeologists, but the newly discovered one is the oldest on record, Pryor said. It was found by study co-researcher Alexander Dudin, the director of the Kostenki Museum-Preserve in Voronezh, Russia, who was doing survey work in 2015 at the archaeological site of Kostenki 11, about 350 miles (560 kilometers) south of Moscow.

The bone circle measures about 36 feet (11 meters) in diameter. It's difficult to say what this and other bone-made structures would have looked like during the last ice age, Pryor said, "but at Kostenki 11, we can imagine a ring of mammoth bones piled up on top of each other. Some of the bones were still in articulation [joined together], indicating that at least some of the bones still had flesh on them when they were added to the pile." 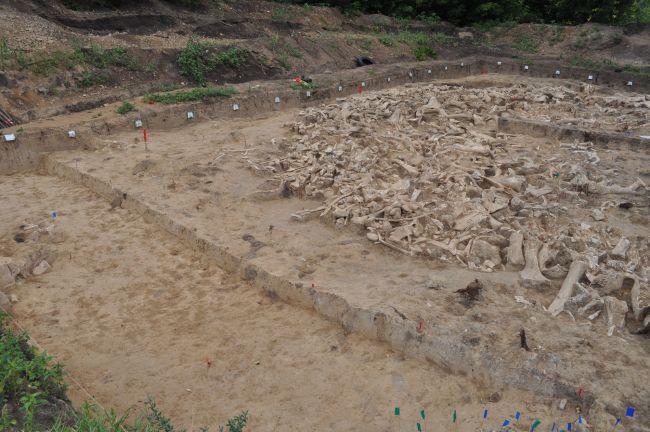 During the last ice age, humans arranged these bones in a circle.

He added that, "beyond this, some have speculated about wooden poles used to support a roof made of animal hides, but there is no evidence for this yet at Kostenki 11."The bones used to construct the structure were likely scavenged, Pryor said. There is some evidence that during the ice age people hunted mammoths, as evidenced by the discovery of a javelin embedded in a 25,000-year-old mammoth rib in Poland, but this may have been an exception, not the norm, Pryor said. 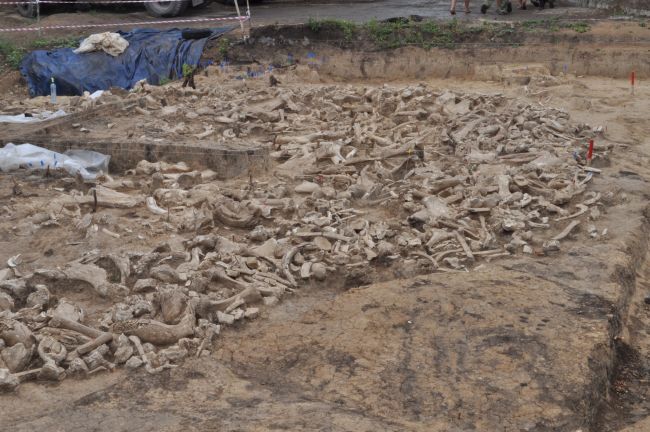 A bird's-eye view of the site.

The last ice age swept northern Europe between 75,000 and 18,000 years ago, but it reached its most bone-chilling temperatures during a period lasting from about 23,000 to 18,000 years ago, when the circle at Kostenki 11 was built.

During this time, the summers were short and cool, while the winters were long and cold, reaching temperatures as low as minus 4 degrees Fahrenheit (minus 20 degrees Celsius). These freezing temperatures prompted many human groups to head south, where prey and other resources were more abundant. Eventually, the community that built this bone circle left, too, even though there was a river nearby that could have provided them with fresh water, Pryor said. 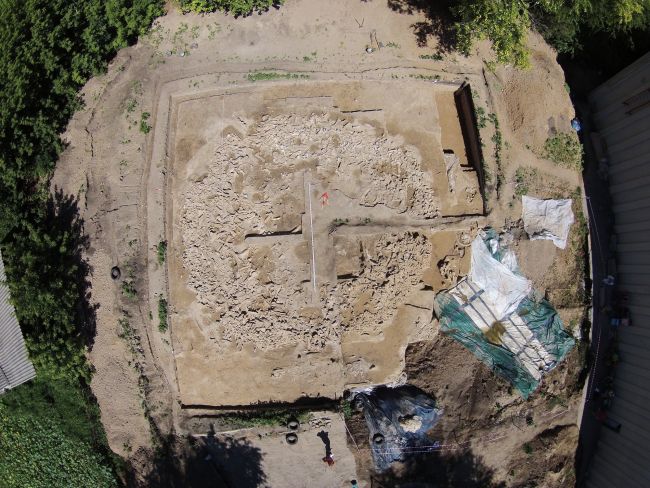 A view of the sheer amount of bones at the site.

That community didn't leave behind many clues about how it used this structure. Maybe it was a dwelling, archaeologists have suggested. But Pryor and his colleagues have another idea; perhaps these boney buildings were used for rituals or even for food storage, given that each mammoth had a "mammoth" amount of meat on it, he said.

It's unlikely that it was a dwelling because there's less evidence of human activity there than would be expected of a full-blown abode, he said. Moreover, this sort of house wouldn't have been safe. "The fact that some of the bones are still articulated means that they would have still been smelly," because they would have had meat on them, Pryor said. "They would have been attractive to wolves and foxes and other scavengers."

An analysis of tiny debris found within the bone circle and three pits located outside of it revealed burned pieces of charcoal and bone. These findings indicate that, despite the bitter cold, there were trees nearby that could be burned, Pryor said. In addition, it shows that these people were burning bone, which produces a brighter fire with less heat compared with a wood fire, he said. 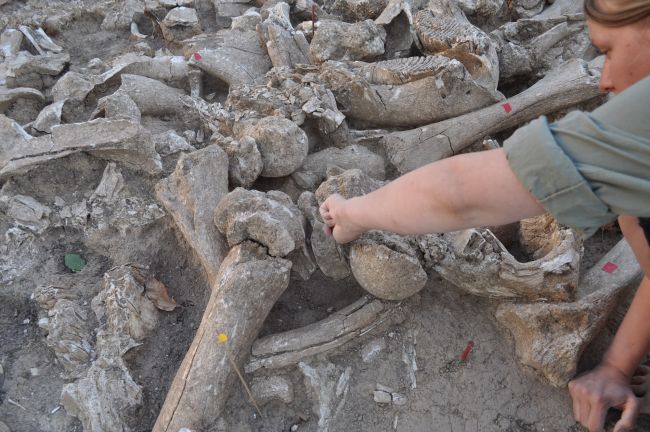 Notice the mammoth tooth just above this researcher's arm.

The debris analysis also revealed 300 tiny stone and flint chips, likely produced when ancient people there knapped stones into sharp tools for butchering animals and scraping hides. It also turned up more than 50 small charred seeds, the remains of plants growing locally or maybe food remains from cooking and eating.

"This is a story about our human ancestors innovating to survive the coldest point of the last ice age and using all resources and materials that they had," Pryor said. "It would have been a challenging place to live, but they were making a success out of it."

The suggestion that the bone structure was used for storage and the pits around it as trash cans "are not Earth-shattering revelations, [but] they do provide useful insights into the lives of the people who once occupied the site," said E. James Dixon, an emeritus professor of anthropology at the University of New Mexico who was not involved in the study. 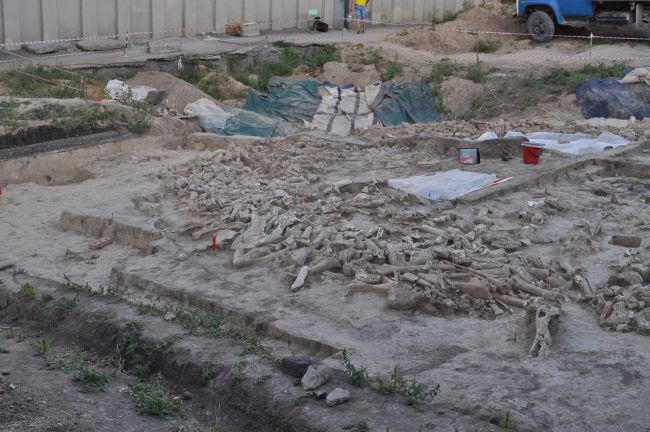 This structure may have served as a house, a storage facility for meat or even a place for rituals.

The last ice age is a "fascinating time period in Eurasian archeology," Dixon told Live Science in an email, and the study "clearly demonstrates that modern humans were adapted to higher latitudes at the very height of the last ice age."

The study was published online March 17 in the journal Antiquity. 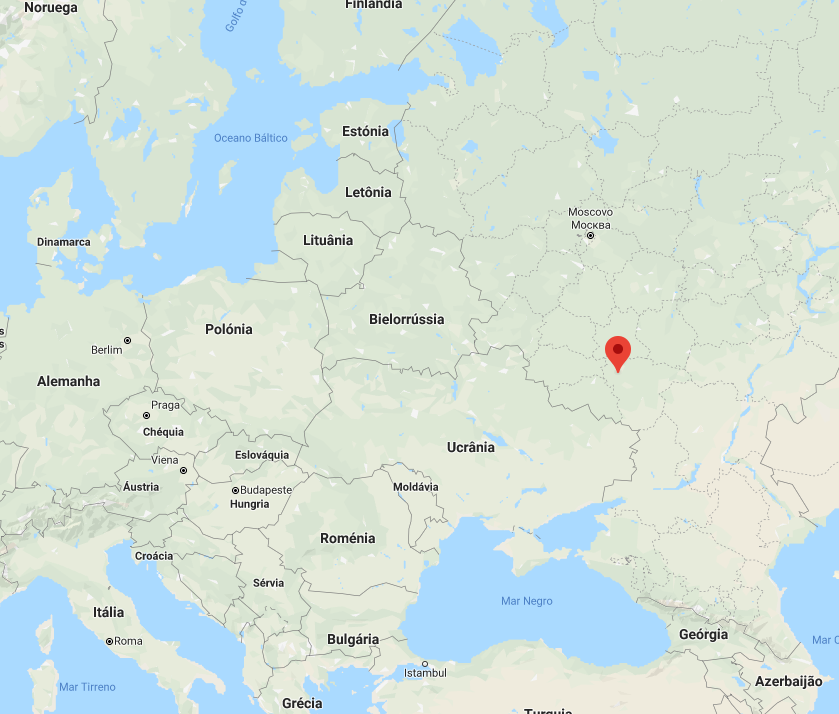 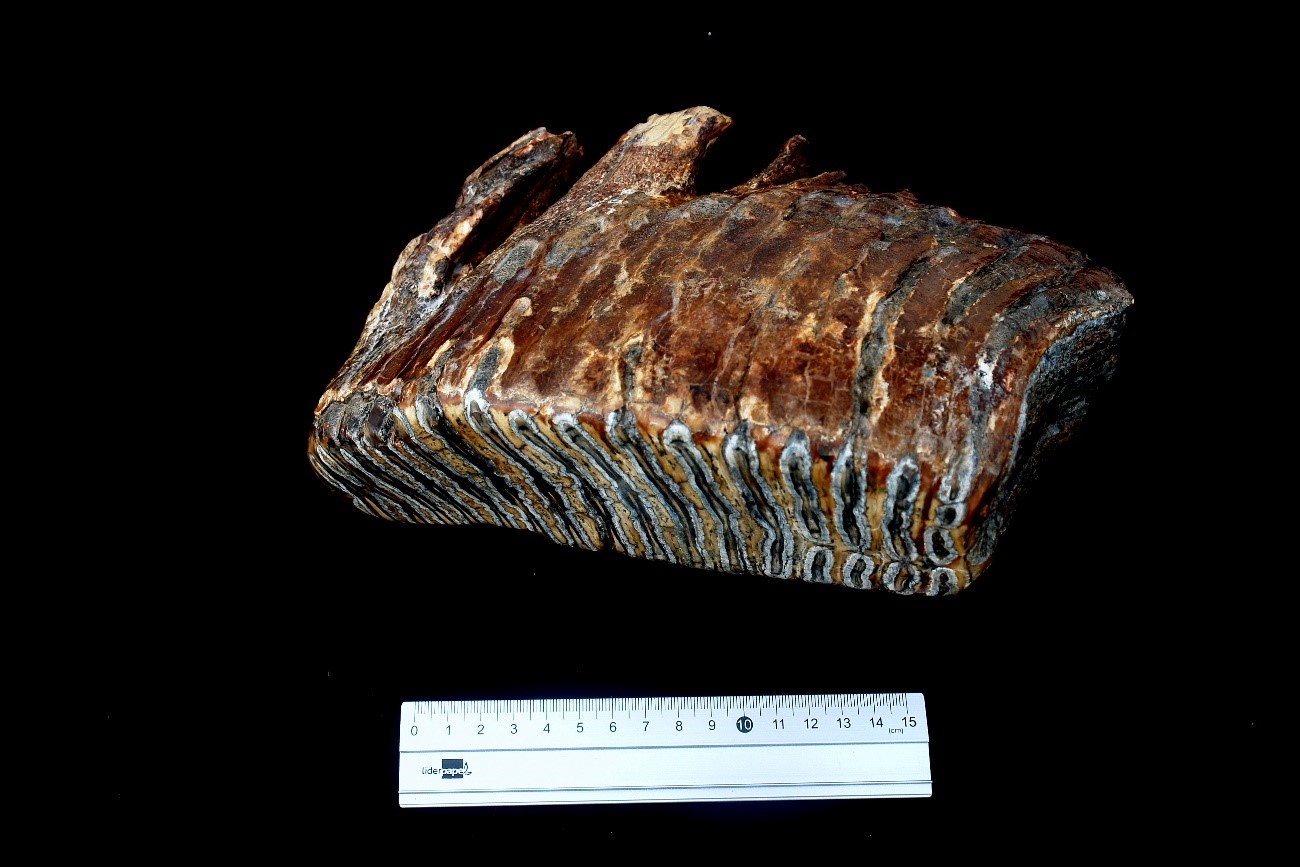