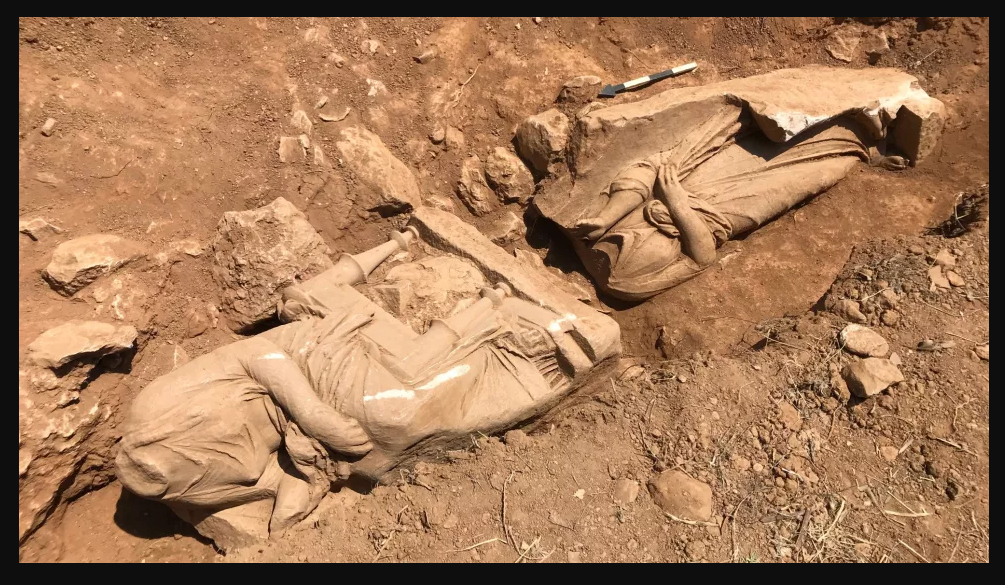 Two headless statues discovered at an ancient Greek burial site depict a dead woman in a seated position and possibly her servant. (Image: © Greek Ministry of Culture and Sports)

Headless statues of a dead woman and her servant have been found in an ancient Greek cemetery.

The two statues, which date to the fourth century B.C., were fragments of a white marble monument uncovered prior to the construction of a town hall in Paiania, east of Athens, Greece's Ministry of Culture and Sports announced in a statement Sunday (Jan. 24).

The statues depict the dead woman sitting in an ornate chair, while her servant, also a woman, is standing, the statement said. The monument would have marked the unknown seated woman’s grave.

The marble grave monument is typical of grave markers from the fourth century B.C., with similar examples found in the Holy Temple of Agia Paraskevi in ​​Markopoulo Mesogaias and the cemetery of Kerameikos in Athens, according to the statement.

Typical grave monuments of the time depicted family gatherings or dead masters and mistresses with their slaves, while gravestones of children showed them accompanied by their pets, Olga Palagia, a professor of classical archaeology at the National and Kapodistrian University of Athens, wrote in "A Companion to Greek Architecture" (John Wiley & Sons, 2016).

The ministry's statement does not explain why these statues show the women without their heads, but the ancient monument was found in fragments. Grave monuments typically portrayed idealized faces, according to Palagia, so they would not have been accurate portraits.

Luxurious burial monuments like this one were outlawed in 317 B.C. by the governor of Athens at the time, Demetrios of Phaleron, which helps date the monument to before this period, according to the statement.

The monument was taken to Greece's Archaeological Museum of Brauron for maintenance and safekeeping, the statement said.