In the age of monitoring nuclear weapons testing, existing regional seismic networks may be a key to discovering small, undetected explosions around the world. 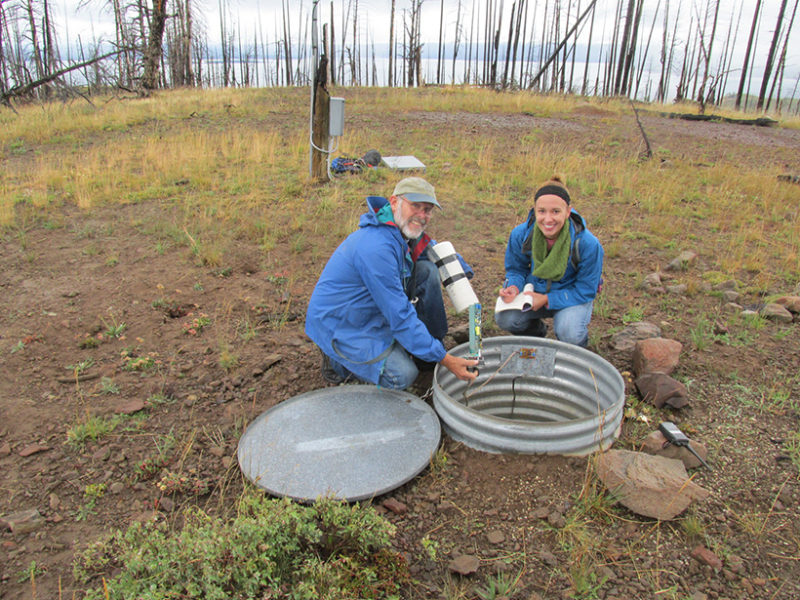 Seismographic technicians check equipment in a vault in the Oquirrh Mountains in Utah.

Big underground nuclear explosion tests don’t normally go unnoticed in the seismic world. The energy released from these detonations shakes the ground, registering events on seismometers around the globe.

But the amount, or yield, of explosive material from a nuclear test isn’t always large. Smaller yields mean smaller magnitudes of energy released in an explosion—and this can make detection more difficult if instrumentation is sparse.

An international monitoring group keeps a close watch looking for underground nuclear testing, looking especially for seismic signals of an explosion, but global data stations are limited. Keith Koper, a seismologist and author of a new paper in Seismological Research Letters, said that by tapping into regional seismic networks that already exist, monitoring coverage could increase the sensitivity of detection, identifying even small nuclear tests.

Picture a nuclear explosion. Chances are you envisioned a remote locale in the South Pacific, with a blooming mushroom cloud lighting up the sky. These types of giant, aboveground explosions haven’t been conducted for decades, says Stephen Herzog, Stanton Nuclear Security Predoctoral Fellow at Harvard, who was not involved in the study.

Nuclear tests have been moved underground, and the number of these explosions has tapered off dramatically since the 1980s. In fact, the “only country to have tested nuclear weapons in this century is North Korea,” said Herzog. He paused to add, “that we know of.”

It’s this unknown testing that is a concern for the global community. In 1996, the Comprehensive Nuclear-Test-Ban Treaty (CTBT) was introduced at the United Nations. Under the CTBT, all nuclear weapons test explosions are prohibited.

Since its introduction, the CTBT has been signed by 184 countries, and 168 have ratified it. Although some countries, including North Korea, India, and Pakistan, haven’t signed the treaty, Herzog emphasized that most have. “The global norm against nuclear testing is extremely powerful.”

Needle in a Haystack

“I wanted to make sure that the broader community was aware that [seismologists] have expertise and that our data, our methods, and [our] experience can be useful in global monitoring of low-yield nuclear weapons,” said Koper.

This expertise is especially useful when trying to figure out whether a rumble is an explosion from a nuclear test or something natural. “It’s really difficult to tell the difference between one explosion type and another,” Koper said.

One way to differentiate explosions is to look at the ratios of P waves to S waves. Although earthquakes and explosions make both types of waves, the ratio can help scientists tell the difference.

Seismologists also look at the waveforms of energy after an event. Underground explosions tend to be shallow—a few hundred meters to a kilometer deep—and produce distinct signatures.

“When the event is a seismic event, it is very shallow; it tends to be very ‘ringy,’” said Koper, adding that “the waveforms tend to be kind of long and drawn out.” This looks quite different from earthquakes that tend to occur much deeper in the crust.

Koper said seismologists can use these tools to screen out the many seismic signals picked up by seismic monitoring networks. “If you’re going for a needle in a haystack,” he said, “if you can shrink the size of your haystack, that’s one way to find the needle. We want to get rid of as much of the hay as possible.”

Detection gets trickier when the explosions have smaller yields. Essentially, smaller yields of explosives mean smaller-magnitude events. The IMS has 45 primary and 115 auxiliary stations globally, as of June 2019. Although the network has detected explosions of ~0.5- to 2.0-kiloton yields, Koper noted that it’s a challenge for current stations to pick up detonations with <0.1-kiloton yields.

“There’s been a huge investment in the IMS—it’s up and running and it’s almost fully deployed,” said Koper. The network has produced “good, beautiful data,” he said, but it’s a sparse network of stations. “There’s only so low [a magnitude] you can go without augmenting it with extra data.”

Koper says he hopes his paper will give monitoring agencies like the CTBTO an idea about how regional systems can boost their data. “There’s so much open data around the world that [are] not used to the fullest extent,” he said, adding that new seismometers are deployed all the time. “Let’s be aware of those [new seismometers] and potentially use them in this global security issue of low-yield, nuclear weapons treaty verification.”

Herzog agreed, noting that “the type of networks Koper’s talking about [in the paper] exist everywhere in the world.…There are thousands of these stations that could provide the necessary data to improve discrimination from nuclear tests…[and] could improve [locating] these types of events.”