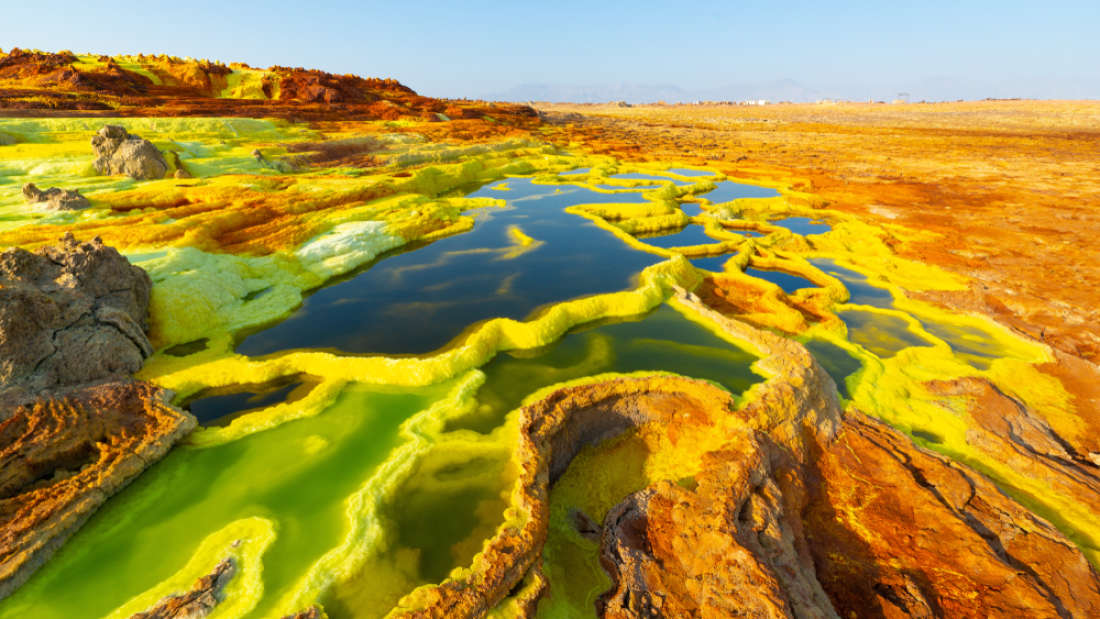 Welcome to Earth: the geothermal area of Dallol in Ethiopia.

The Dallol springs of Ethiopia, an otherworldly hydrothermal hellscape of superheated water, bubbling sulfuric acid, and burnt salt, are perhaps as inhospitable as they sound.

Researchers led by the University of Paris-Sud, reporting in the journal Nature Ecology & Evolution, headed to this surreal environment in a quest to find life using a bunch of microscopy techniques and chemical analyses. Contrary to previous research, they concluded that there’s no clear evidence life can exist in the most intense geothermal lakes of the Dallol area.

Found in Ethiopia's volcanically active Danakil Depression, the hydrothermal systems of Dallol are truly unique. Beneath the chlorine and sulfur vapor fogs, springs gurgle out water that’s 10 times saltier than seawater, bubbling away at over 108°C (226°F). The brine is also devoid of any oxygen and boasts a hyperacid pH of around zero. It’s defined as a “poly-extreme” site as it possesses many extreme physicochemical characteristics.

Despite these inhospitable conditions, another study published in May 2019 argued that the poly-extreme environment of Dallol held evidence of “ultra-small microorganisms,” such as archaea-based life that’s up to 20 times smaller than the average bacterium.

However, the new study refutes this. The researchers argue the evidence of life from the May study was actually lifeless blobs of mineral that look like cells under a microscope.

Their analysis found human-related bacteria they believe were transported to the area by tourists visiting the site. While they also found evidence of bacteria, archaea, and fungi in some of the more temperate pools of Dallol, they argue that many of the pools contained no microorganisms as they possess two barriers to life.

The first of these hurdles is the high concentration of free magnesium ions found in the water. The other is a combination of hyperacidity and hypersalinity, even if it had a more moderate temperature. Extremophile life is able to survive one of these harsh conditions in isolation, however, the researchers argue that life cannot develop defenses against both simultaneously.

Life, at least as we know it, needs water. We also tend to assume that a liquid water environment is a sure-fire indicator of life, especially if we’re searching for hints of life elsewhere in our Solar System or galaxy. However, this research suggests this is not the case – just because an environment has liquid water, you should not assume there is life. After all, a distant planet might have lukewarm oceans of liquid water, but if they're hyper-acidic, super-salty, and rich in magnesium ions, the chances of life will be slim.