Scientists have shown that mineral carbonation can permanently capture and store carbon quickly enough and safely enough to rise to the challenge of climate change. 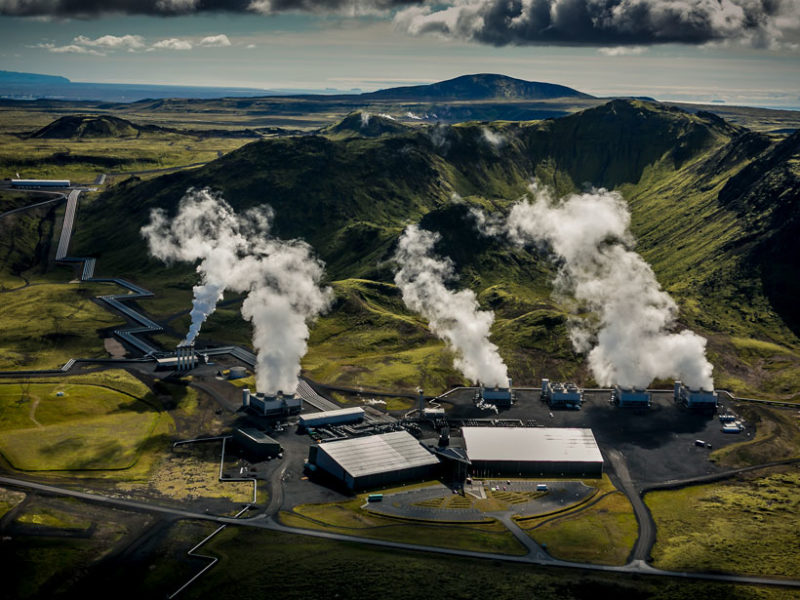 Iceland’s Hellisheiði Geothermal Power Station, above, is the third largest geothermal power station in the world and the site of ongoing mineral carbonation experiments.

In carbon storage experiments tied to geothermal power plants in Iceland, 90% of injected carbon dioxide (CO2) transformed into minerals in just 2 years. Standard carbon storage methods can take thousands of years to do the same.

“We are basing our methods on this natural process which is part of the big carbon cycle where all carbon on Earth derives from and ends up in rocks,” said one of the lead researchers, Sandra Snæbjörnsdóttir. She is the head of CO2 mineral storage at CarbFix.

“By mineralizing, we are permanently getting rid of the CO2. We can walk away from it. We don’t have to monitor it for the next decades or so. The permanent storage is the key here,” she said.

The Intergovernmental Panel on Climate Change reported that to keep climate change below 1.5°C, humanity must not only drastically cut CO2 emissions but actively remove CO2 from the atmosphere and keep it locked away. Most ongoing carbon capture and storage (CCS) projects seal captured CO2 deep underground in sedimentary rock reservoirs to keep it from escaping. That carbon eventually seeps into small rock pores, dissolves in groundwater, and reacts with the rock to become carbonate minerals, trapping the carbon for good.

However, this method alone can’t store a large enough volume of carbon or mineralize it fast enough to meet the carbon storage demand. It can take thousands of years from start to finish for all of the carbon to mineralize, and at any point, a shift in the rocks can cause some carbon to escape.

Climate researchers have long recognized that highly reactive basaltic rocks could be a solution to the carbon storage problem. In addition to being common around the world, basalts contain high concentrations of calcium and magnesium ions that chemically react with CO2 to make calcite, dolomite, and magnesite. Moreover, dissolving the CO2 in water aboveground and then injecting it into subsurface basalts bypasses the slower and less secure stages of conventional carbon storage.

Geothermal power stations, which sit atop basalt-rich volcano deposits, were a natural site for the new method’s first field tests. Since 2012, the CarbFix project has partnered with Iceland’s Hellisheiði Geothermal Power Station to capture the CO2 released when drawing up hot water from the ground. The team dissolves the CO2 in wastewater and injects it hundreds of meters deep into the basaltic ground. The team reduced the risk of induced seismicity by carefully surveying injection sites and adjusting injection rates as needed. 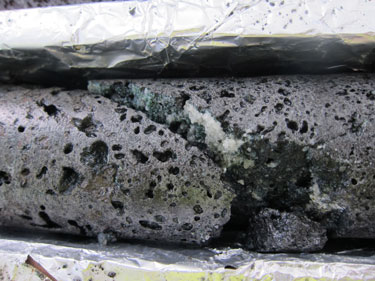 Carbon dioxide dissolved in water reacted with the basalt (black) in this core to create carbonates (white), trapping the carbon in solid formdeep beneath the ground.

Snæbjörnsdóttir and her team have been examining the injection sites using fluid sampling and tracers to quantify how well the mineral carbonation process works. The team found that over 90% of the injected CO2 had been converted into minerals within 2 years of injection.

“We have demonstrated a very rapid mineralization of the injected gases,” she said. “But also the way that we inject is that we dissolve the CO2 in water prior to or during injection. This means increased security as well, because by dissolving the CO2 we’re killing the buoyancy of the CO2. The CO2-charged fluid is heavier than the groundwater in the formation where we are injecting, so it has the tendency to sink rather than to rise up. This increased storage security.”

Expanding Around the Globe

Mineral carbonation has been gaining interest in recent years, Snæbjörnsdóttir said. “People often believe that this can only be done if you have geothermal [heat], but that’s not the case,” she said. “The things that you need for this to work are just a source of CO2, [water], and reactive rocks.”

A team in the United States found a similar mineralization rate on the flood basalts of the Columbia River. The European Union has sponsored future versions of CarbFix, and an international consortium has formed with the goal of using CCS to lower geothermal emissions.

Snæbjörnsdóttir’s team is currently working to combine this process with direct air capture of CO2 and researching other pathways to mineral carbonation.

“We know that basalts like we have here in Iceland are perfect for this method,” she said, “but there might be rock types that are less reactive but still reactive enough. If some of those rock types are feasible to use for this method, we could broaden the applicability even more.” 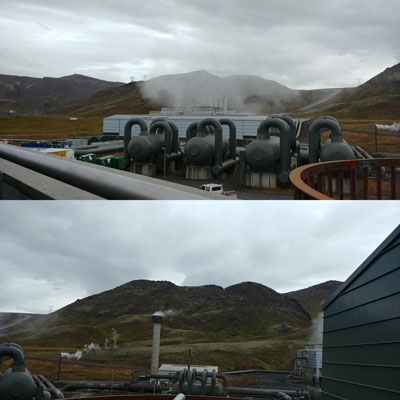 “For example, there’s been a lot of work done in Oman where they have very reactive peridotites in connection with the ophiolites that are there,” she said.

The team is also looking into how well offshore injections using seawater might work. Offshore injection would make this method an option in regions with limited freshwater resources or that might be prone to induced seismicity. If combined with direct air capture of CO2, that could also bring this carbon storage method to areas that aren’t strong CO2 emitters.

“It expands the applicability of CCS in general because by using this method you can store CO2 in areas you had not considered doing it before,” Snæbjörnsdóttir said. “You’re opening up new possibilities in addition to the conventional CCS that is already taking place.”

The team published these results in Nature Reviews Earth and Environment in January.