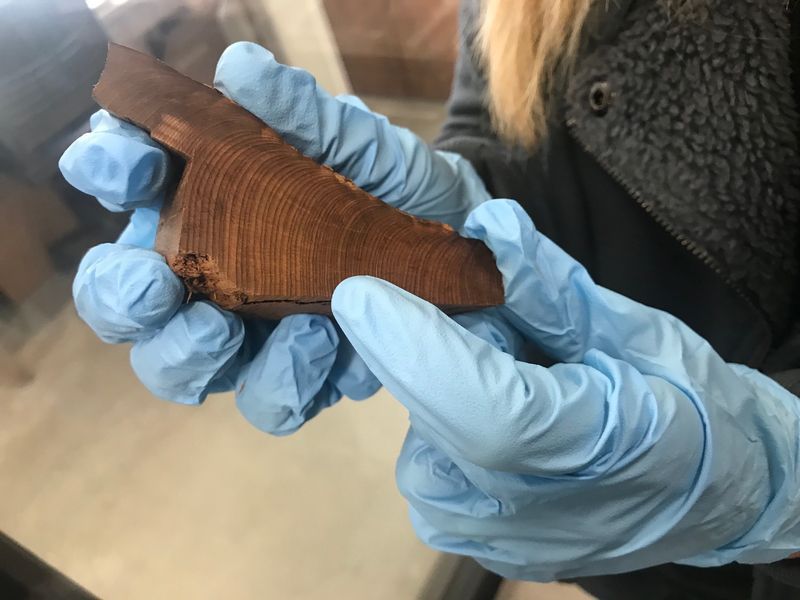 Researcher Charlotte Pearson points to the light tree ring that could mark the year of the Thera eruption. (Mikayla Mace).

Some 3,000 years ago, the volcano on the Greek island of Thera—now known as Santorini—experienced one of the largest eruptions in Earth’s recorded history.

The cataclysm sent seismic waves shuddering through the earth, cracking through layers of rock and inundating nearby islands with catastrophic waves. Rivers of searing hot debris coated the ground; clouds of ash filled the sky. The fallout from the eruption was so far-reaching that it was felt many hundreds of miles away.

But in the millennia since, the Earth has repaired itself, cloaking most traces of the catastrophic event. Though a combination of artifacts, written records and chemical analysis tentatively date the eruption to sometime between 1600 and 1500 B.C., researchers have long struggled to pinpoint the exact year of Thera’s big boom. Now, a team of scientists has found a crucial clue in an unlikely place: the wood of an ancient grove of juniper trees, which suggests that the volcano blew its top around the year 1560 B.C., according to a study published last week in the journal Proceedings of the National Academy of Sciences.

Dating the eruption—considered one of the most momentous events in the region’s history—ties together “a timeline of ancient Egypt, Greece, Turkey and the rest of the Mediterranean at this critical point in the ancient world,” said study author Charlotte Pearson, a researcher at the University of Arizona, in a 2018 statement. (Previous tree ring work by Pearson and her colleagues looked at chemical signatures in wood to narrow the likely range of the eruption to an approximate century but was unable to pin down a specific year.)

As Isaac Schultz reports for Atlas Obscura, the wood’s apparent commemoration of the event is subtle, marked only by a thin circlet of discoloration preserved in the tree trunks used to construct an ancient tomb. But in every tree ring is a “time capsule that you can unpack,” says Pearson in a recent statement.

As they sprout from seedlings, trees grow in height and width, adding a concentric layer of tissue to their trunks roughly once a year. Tree rings record information about the environment, diligently archiving data on important climatic factors like rainfall, temperature and the health of local soil. Disruptions get tabulated, too, appearing as anomalies—in this case, strange-looking rings—that stick out from the rest of the bunch.

This appears to have been the case for a collection of timbers used to construct the Midas Mound Tumulus, an ancient Turkish tomb thought to hail from the same era as the Thera eruption. Cut from juniper trees, these pieces of wood all contained an unusually pale, wide band of tissue that reminded the researchers of a frost ring—a phenomenon previously linked to volcanic eruptions, says study author Matthew Salzer, a tree ring researcher at the University of Arizona, in the statement.

The volcanic link was unlikely to be a coincidence, the researchers reasoned. But the tomb’s wood posed its own dating dilemma.

Ring patterns in trees that are still alive can be analyzed and dated, tying each specific ring to a particular year by simply counting backward. Once a tree is cut down, however, its ties to the calendar are severed. Without knowing when a tree was felled, researchers can’t backdate its rings, leaving their ring chronologies “floating” in time, Kristen de Graauw, a tree ring researcher at West Virginia University who wasn’t involved in the study, tells Atlas Obscura. This, unfortunately, was the case for the Midas Mound Tumulus timbers.

To anchor the trees’ floating timelines and determine when their frost rings had formed, the team compared the patterns in the junipers’ trunks to those found in trees that had lived around the same time and been cut down on known dates. These dated trees, sourced from around the world, served as reference points, helping the researchers narrow down their search. Through this method, they deduced that the junipers had laid down their frost rings in the year 1560 B.C., now “tentatively” suggested as a possible date for the Thera eruption, says Pearson in the statement.

The team remains unsure what conditions prompted the junipers to sprout their pale, wide rings, though the cause was undoubtedly chemical. Perhaps the volcano dumped acid in the environment from afar, or sparked a series of fires. Finding those answers will require “more digging,” and ideally, more eruption-marked trees, Pearson tells Atlas Obscura.

For now, says Pearson in the statement, nailing the dates from the Turkish tomb at least gives “another little piece of the puzzle.”